This was a project i had wanted to try for a little while. Before i get to it theres a bit of back story i need to explain.

Im a massive Judge Dredd fan, have been for many years, read the comics, books and seen the flicks (both of them). I have always wanted a Judge Dredd helmet/costume/lawgiver, so naturally i thought seeing as halloween was round the corner i would get stuck in.
So! First up i decided to work on was the Lawgiver. For those not familiar with what that is, its the pistol used by the street Judges of Megacity One.

"The Lawgiver is a handgun featuring semi- and fully automatic fire, manual and automatic focusing and targeting, plus an in-built computer capable of controlling its operation. It fires a range of speciality ammunition. An in-line gunsight shows the view directly down the barrel. A Lawgiver can only be operated by its designated Judge owner, whose palm print is programmed into the gun's memory" - Lawgiver Wiki


The gun is capable of firing several types of Ammunition depending on whats needed at the time!

"The gun has a maximum range of up to three miles and has six distinct settings:[1]
Some stories by Judge Dredd creator John Wagner have added a stun bullet, while stories by Gordon Rennie have included a stunner beam (which doesn't always work). An "exorcist" bullet for use against supernatural enemies was developed by Gordon Rennie. These and the six modes of fire listed above are canon. The Judge Dredd audio drama Wanted: Dredd Or Alive has a Tracer bullet, which allows Judges to electronically track what they've shot. One story had a judge fire a marker shell, a round which tags its target with green paint.
Some publications replace the standard bullet with the Grenade setting. In addition, the novelisations of David Bishop replaced the Incendiary round with a Gas round, which released a cloud of Stumm gas, the Mega City equivalent of CS or tear gas. Other issues have shown the new Lawgiver to have a limited number of close-range electrical stun attacks capable of incapacitating large numbers of opponents at close range." - Lawgiver Wiki

This is why the lawgiver has two clips. A normal clip is inserted into the handle of the pistol (which in this case is a standard Airsoft Glock) which contains the Standard Bullets and a larger clip inserts into the underside of the barrel containing the various other ammunitions

Another bit of back story; i work for Toys R Us. Its a relatively cool job for a geek like me. I get paid to sell/demonstrate toys and electronics.
A week or so ago i noticed a knock off nerf gun called an Airzone Quickfire actualy bore a striking resemblance to a lawgiver; 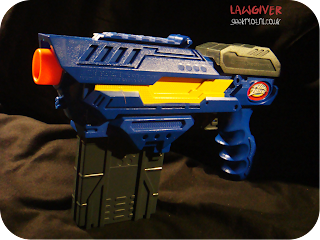 Naturally i got intrigued and wondered if i could pull something together.So i bought a set and took one apart and removed the innards. 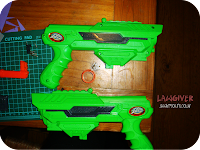 Taking them apart took only a few minutes, six screws on one side and it was apart. 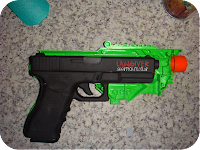 Next i wanted to make sure the glock was going to fit inside without much issue. Turns out you pretty much have to sand the entire things down with a dremel before the glock sits comfortably without, it took me about an hour to do both sides.Then i cut the original handle/trigger area off so i could use the glock's.
It was a seriously tight fit and i was starting to have serious doubts about if it was going to work. When i finally got both parts together there was a large gap in the top but i had already decided i was going to cut off the tactical rails on the top. It also meant that i could just fill in the gaps with rondo and sand them smooth.

The handle/trigger area was a bit of a challenge to fill with rondo because the gaps were so large, so it turned out a bit messy underneath, but as my hand will be there im not too worried. I'll most certainly go back and finish it up at a later date.
After that i stuck on a bit of primer to have an idea of what it will look like uniform colour. 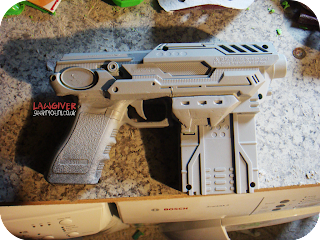 I used more rondo to fill in some of the excess details on the front clip housing. Then i dremelled in the tripple light detail.
Between that and painting it was just a load of filling and sanding on the tops and bottoms.
Then i had a bit of a disaster. I accidently sanded through the rondo too far in the bottom and took a large chunk out of the side above the handle, mainly in the rounded detail at the back. So i filled it out and put on a fake clip release with a bit of foamex.

Then i slapped on a load of black primer and once i was happy with that i added the silver details and weathering. It was a bit of a rush job so there are a few messy patches but i intend to repaint it at some point anyway.
So heres a final shot! 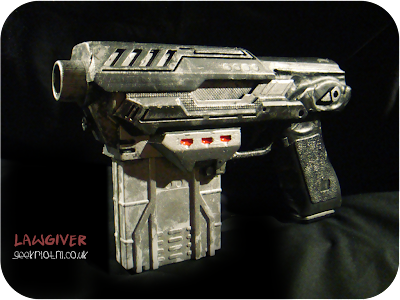 Not too shabby!
Theres a lot ill change in future, especially the back area which ill probably rebuild completely using foamex or styrene.

Im happy with it for now so ill move onto the helmet or shoulders next and probably come back to it and add/change parts when i have more time!

Email ThisBlogThis!Share to TwitterShare to FacebookShare to Pinterest
Labels: Dredd